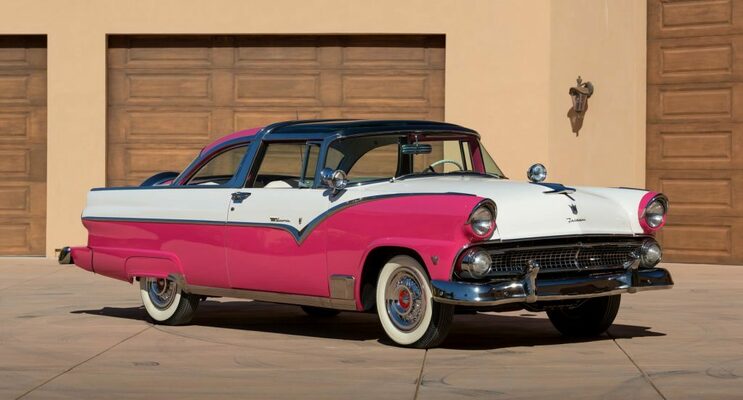 The history of the name of the model began in 1955. For two years, a special version of the Ford Fairlane model was produced, which was called the Crown Victoria. This special version had its own special modification with the long name Ford Fairlane Crown Victoria Skyliner, which featured a roof with a front segment made of transparent Plexiglas’s. Production continued for two years, after which in 1956 the car was excluded from the model range of Ford, and the name Crown Victoria was temporarily forgotten.
It was decided to revive in 1980, but it has not received independence. Now the so-called maximum complete set of full-size sedan Ford LTD. The name came to replace the name Landau, which does not reflect the essence of the vehicle - it has always had a hard metal roof. A distinctive feature of the Ford LTD Crown Victoria was a wide chrome strip, rising on the rear door pillars from the level of the Windows and dividing the roof in two. It was designed to simulate the power structure of the body.
In 1992, the first real Ford Crown Victoria came to the market, which finally lost the console LTD. The bodywork has been thoroughly redesigned - it was nothing like the angular shape of its predecessor. In addition, Ford designers were given a rather difficult task - to make the Crown Victoria unlike Mercury Grand Marquis, with whom. Together with the base model was put into production and police modification, which was named Ford Crown Victoria Police Interceptor (CVPI). It was characterized by increased to 250 horsepower engine power, as well as the presence of a special oil cooler. This detail allows a long time to move at high speeds without the risk of damage to the engine.
In 1995, the appearance of Crown Victoria was again changed-the update included a different grille, front and rear lighting, as well as the dashboard.In 1998, the model Ford Crown Victoria of the second generation was presented to the world community. In terms of design, he moved away from the original idea, because not everyone liked the comparison with a small sedan Taurus. Now the car was maximally unified with the Mercury Grand Marquis. The only differences were the extended headlights, other rear lights, as well as modified bumpers. In addition, this year Crown Victoria for the first time received a large rectangular grille, which is so lacking conservative customers. However, the interior is almost unchanged in comparison with last year's model except for a different steering wheel.
The next major update was in 2006. Now the cars were equipped with a new dashboard with a modern speedometer and tachometer - for the first time for the Ford Crown Victoria model. In addition, luxury modifications received on-Board computer, and as an option began to offer factory alarm. Technical changes have affected the transmission oil cooler, which has now been integrated into the air conditioning evaporator. The last major update was waiting for the car in 2007 - now for all modifications became the basic audio system with CD-player and Keyless access to the cabin. Since 2008, sales of Ford Crown Victoria to private customers have been completely discontinued. Demand for the sedan fell to a critical point due to the emergence of the new flagship model Ford Five Hundred. However, to remove from production such a reliable model was irrational, because it was purchased by corporate fleets and government agencies. Therefore, until 2011 produced cars in modifications for the police and taxi services.