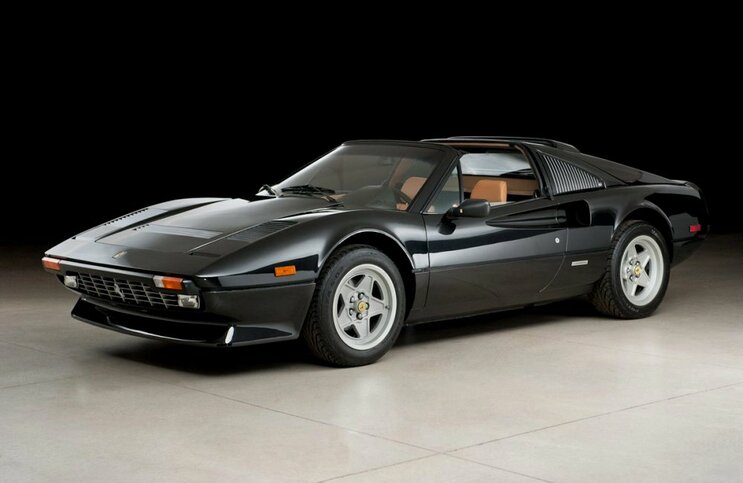 In 1978 all 308s were given dual ignition systems. Between 1977 and 1980 increasing emission controls such as a catalytic converter were added to the engine, sapping its power somewhat.
In 1983 Ferrari reclaimed the power of the original 308 when it released the 308 qv. The "qv" designated quattrovalvole, or four valve per cylinder heads.  The compression ratio increase to 9.2:1 while that of US models was lowered slightly to 8.6:1. Power was rated at 240bhp in Europe and 235bhp in North America, both at 6800rpm; torque peaked at over 187lb/ft at 5000rpm and 5500rpm respectively.  Weight dropped to 3190lbs for the 308GTBqv and 3229lbs for the 308GTSqv. The weight loss and increased available power render the quattrovalvole models quicker than the original 308GTB.
The interior of the 308 series follows the finest traditions of Italian design, but was well ahead of its contemporaries in 1975.  Before the 308, no mid-engined two-seaters had roomy interiors, few even had adjustable seats. Cramped quarters, seating positions too low for comfort and poor outward vision were the norm.  The 308 shifted the paradigm.
The 308 is very roomy inside, intrusion coming only from the front wheel wells. These cause the pedals to splay towards the center, positioning them perfectly for heel and toe driving.  The thin-shell seats covered in supple hides are both comfortable and highly supportive. Light and adjustable with ample side bolsters, the seats are like comfortable racing buckets.  Inside the doors are leather covered and contain a generous map pocket, door pull and arm rest.
The slim center console rises only to the height of the seat bottoms and does not extend to the front bulkhead, enhancing the sense of space. The console contains various ancillary switches and controls.  The rear console houses the parking brake handle and a storage box on GTB models. Dominating the cars's centre is the tall chromed gear stick and its polished shift gate which comes easily to hand with minimal movement from the leather and brushed aluminum.