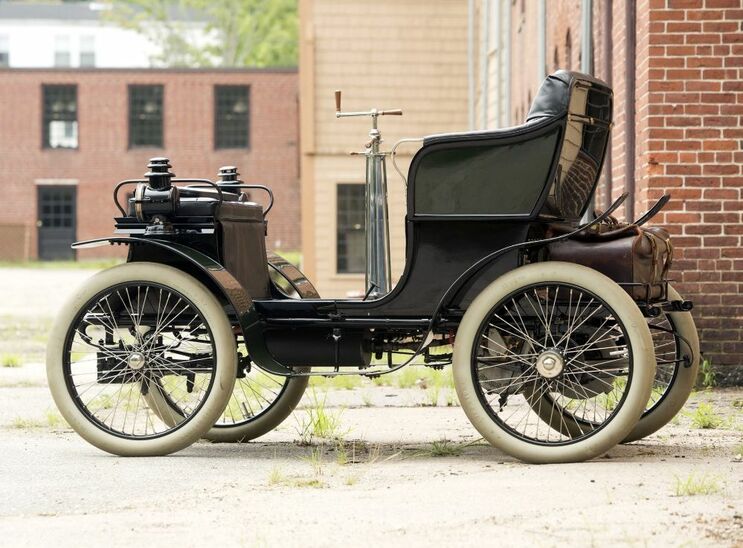 RETRO CARS
De Dion-Bouton 1901
Jul 23, 2019 at 5:34am / JOHN / 0 Comments
De Dion Bouton More than 100 years ago this firm was a force to be reckoned with in the world of horseless carriages. The combination - like Rolls and Royce - of a noble entrepreneur, Comte Albert de Dion, and a couple of good, sound, engineers - the brothers-in-law Trepardoux & Bouton - proved to be hugely significant. So much so that it’s probable that in the first decade of the 20th Century the firm de Dion Bouton was the largest motor manufacturing firm in the world. Not only did it make its own cars, but it also made the motors and other components for a lot of other marques. We need to remember that continental Europe was well ahead of the United Kingdom - and the United States - at the turn of the 20th century, having foreseen that petrol would replace steam when it came to trackless vehicles as early as 1889.
This despite the fact that the firm was actually based on highly successful steam boilers for heavy transport wagons, ships and trucks.
De Dion realised that steam had serious limitations if you wanted to produce lightweight two and four-seater motor cars, so following on the work of Daimler etc. de Dion Bouton (Trepardoux was a steam man and left as soon as the petrol experiments started) built its first motors as early as 1893. A 137cc single-cylinder half-horsepower and air-cooled was the initial machine, but from it came the single-bangers powering tricycles and light cars such.
The tricky bits involve an atmospheric intake valve that moves open and closed - according to some rule of thumb that only old-time engineers understand - letting in the petrol ready for the next time a spark arrives in the same place. ‘Atmospheric’ means that there’s no cam, let alone lifter, but instead some sort of butterfly restrained by a spring, which has to be just right, and it all sits in lordly splendour above the offset combustion chamber, connected by means of a huge copper tube to the carb. Underneath the cast iron block with the integral head is the exhaust valve, which is driven by a cam of some sort connected to I the crank shaft. In between those two valves the spark plug sticks out. All three are clearly the big players in the combustion chamber, which looks to be partly to one side of the piston. If you look at the photo you can work it out for yourself, and clearly see that this is something of a power absorber in its own right.
Cooling is effected partly by the flow of air through the completely open engine room, generated by the incredible speeds attained (especially downhill, when the rear-only contracting brakes appear to be counsellors rather than affirmative action devices) and partly by pumped water. There’s a header tank on the firewall at engine block height which feeds through the block to the radiator mounted between the front dumb irons, and thence back to the header tank, considerably helped by a very large brass water pump driven, I think, by the motor. The speedo registers up to 30mph (48kph). Gear changing is through expanding bands, which is virtually like a modern day automatic transmission with no clutch.