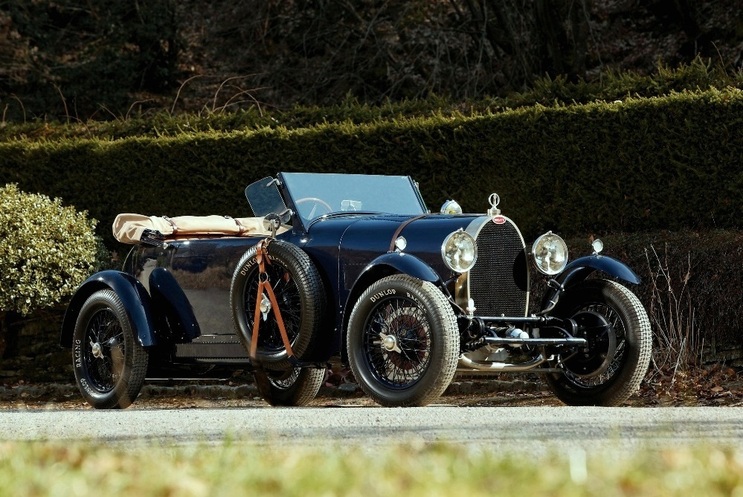 RETRO CARS
Bugatti Type 44 Open Tourer
Jul 10, 2019 at 5:25am / JOHN / 0 Comments
This beautiful Type 44 has been in the country for some time under the ownership of Paul Hicks. Paul had a couple of magnifi cent projects on the go, and sold the pile of  Type 44 bits to Lionel Rogers so he could fund them. This Type 44 was shipped new in 1929 to South America, and remained in Argentina or Brazil for the larger part of 70 years. There is little known about its individual history other than it has had an engine swap at some time. One thousand and ninety-five  Type 44s were made between late 1927 and 1930. Lionel, well known to Targa fans for his exciting Nissan 350Z, commissioned Wallace McNair of Hamilton to turn a basket case into a beauty. He couldn’t have chosen a better person to do it.
Lionel is a tall chap, and one of Wallace’s challenges was to make coachwork that would accommodate a lanky frame and still be in proportion. Not an easy task for a vintage sports tourer but, as you can see, the task has been admirably achieved. They based their coachwork concept on a car Bugatti had built for his daughter Lidia on a Type 40 chassis in 1929. The Type 40 chassis is a four cylinder with a shorter chassis, and whilst it looks rather nice in yellow and black, Lidia’s Type 40 does look rather upright. By adapting that style to the longer wheelbase Type 44, McNair has created a vehicle better-looking than even Bugatti had achieved.
This type of body style is known as Fiacre, which translated means coach, and for Grand Tourers of the day that is exactly what they were aiming to achieve. Cars were still not totally accepted as the means of grand transport in the ’20s, and to make one look like a horse-drawn coach gave the vehicle the air of aristocracy that was required.
Wallace made all the coachwork, from the English ash frame and handbeaten aluminium panels to the magnificent satin-fi nished American black walnut finishers. Bugatti chassis were supplied with a cast aluminium bulkhead and, of course, the engine and radiator; the rest was left to the coach builder. McNair designed an occasional four-seater by using a fold-up hammock-style couch in the rear. It is all trimmed beautifully- you could swear it was done by an Italian artisan, but in fact the trimming was all done by Bernie Beckett in Albany. What a master craftsman.
The hood and its mechanism was designed and made by McNair. Again, it’s a masterpiece. Not content with the pramhood effect that customers would have been satisfi ed with in the ’20s, Wallace wanted the retracted hood to follow the lines of the body. He also wanted it to look taut and defi ne the lines of the car when it was erected. As if he had not given himself enough problems, he wanted the hood to be weather proof and relatively easy to store and erect. It’s a work of art, and all the components that don’t fold are stowed in the fully lined trunk with their own perfectly trimmed storage wallets.