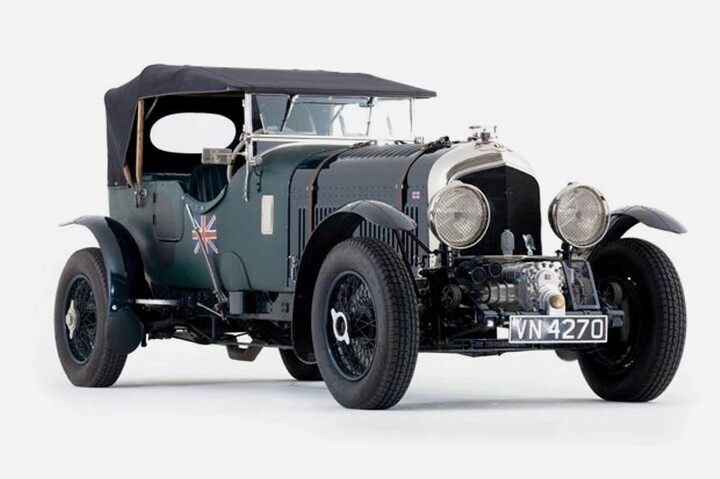 It is designated as a 4.5-litre Blower Bentley, with a Le Mans-type body. The idea was to use appropriate Bentley and Rolls-Royce components to make a version of the famous Le Mans Bentley - the 1929-1931 4.5-litre supercharged model. Creator of the legend Petersen Bentley had been trained as a locomotive engineer. From there, moved onto refining French DFP light cars, introducing the use of aluminium pistons and successfully racing and selling them until WWI broke out. He took his aluminium pistons to the right authorities, and spent WWI working on aero engines, where he capped a very successful war effort by designing and building the Bentley Rotary 1 and 2 engines for the Royal Flying Corps.
By 1919 he’d built up a large and very useful knowledge base, and determined that it was time to build a vehicle encompassing the virtues he deemed essential in his sort of car. The importance of his training in locomotive engineering, then aero engines, cannot be too strongly stated. British heavy industry set standards of excellence backed by immense personal discipline that we must regret the passing of these days. His first car was the Bentley 3.0-litre, and over the next nine years his company made and sold a little over 1600 3.0-litre chassis. Additionally, Bentley made a further 1400 cars mounting bigger motors - 4.5-litre, 6.5-litre and 8.0-litre. The basic Bentley was such a soundly designed car that to this day the reputation of the brand still stands for excellence in almost every feature.
Bentley acknowledged that the two motors which most influenced his thinking were Peugeot’s pre-war dohc (1913) and the Mercedes GP motor of 1914, which he studied in London early in the war. But he had strict criteria by which he built his designs. Reliability was the first aim, then smoothness and silence, and lastly sheer power output.
It was by these criteria that Bentley resisted the idea of supercharging as an aid to victory in racing. He commented that supercharging was a "perversion and corrupted the car’s performance." It’s essentially true that the 4.5-litre supercharged cars were never as successful as they should have been. The basic 4.5-litre motor (1927-’31) was produced to bring back the best features of the original 3.0-litre design, but obviously with extra capacity. Some 665 were sold, plus 55 supercharged versions.
The format followed was standard Bentley practice, with a cast-iron block and non-detachable cylinder head. There were four valves per pot, driven by a sohc operating the Bentley forked double rockers for the inlet and singles for each of the exhaust valves. Between the take-over of Bentley in 1931 by Rolls-Royce and 1934 a lot (relatively) of Bentleys were made using left-over parts, and by no means always the bits correct to the model. Our featured Petersen-built ‘Bentley’ is a prime example of a superbly put together motor car. Yet it excites a huge range of emotions, ranging from total acceptance to total rejection and, of course, reflecting entirely the personal attitudes of each individual expressing them. The answer as to whose emotions are right will never be resolved because it is entirely a personal matter, various forms of spurious logic notwithstanding. it’s everybody’s right to have an opinion. But the fact is that this car does exist, is a very fine piece of work.